It is looking less and less likely that 2018 can avoid becoming a year when every asset class yields negative total returns. Of course, things can still change in December, but unless a sudden risk-on mood sets in, this will be the first time since the financial crisis (and only the third time since the 70s) when investors face such a dire outcome. There’s still hope for a “Christmas rally” this year, but in general things are getting worse fast.

November was particularly damaging to those with long positions in oil. With no doubt, crude’s 30% price drop became the month’s most significant move. How should one interpret that? Does it signal an economic turbulence ahead? What are the implications for oil-dependent markets? Let’s try to answer these questions.

It should first be noted that the decline in oil prices was absolutely expected. Brent at $85 and WTI at $77 per were clearly overheated. Fig. 1 reproduces a model proposed by Deutsche Bank in 2013. It provides a fair value measure for WTI based solely on two parameters: the dollar and the level of global economic activity. The former is quantified by the trade-weighted U.S. dollar index, the latter – by the global manufacturing PMI index.

The gap between the oil prices and their fundamentally-justified levels was nearly as big as back in 2008 (see the graph on the right). The plunge simply returned the prices to normal levels. At the moment of writing, WTI is trading just above $50, with its fair value estimated at $54. Historically, crude prices have diverged from fair levels by 30-40% in either direction. This implies a potential low of $38 per barrel of WTI and $47-48 per barrel of Brent. By providing these estimates we absolutely do not imply that this is where the market is headed. Actually, it’s just the opposite. Oil is likely going into consolidation to trade at or slightly above current levels (as per usual, see the technical and wave analyses in the second half of the review).

The scale and linearity of the November drop was the unexpected part. Prices crashed by a whopping 30% without a single notable corrective move up. This hasn’t happened since 2014. Back then, crude prices collapsed from $115 a barrel for the Brent benchmark to $47 a barrel with no significant attempts to recover as well. Oil plummeted even further in late 2015—early 2016 and traded at $27 a barrel. 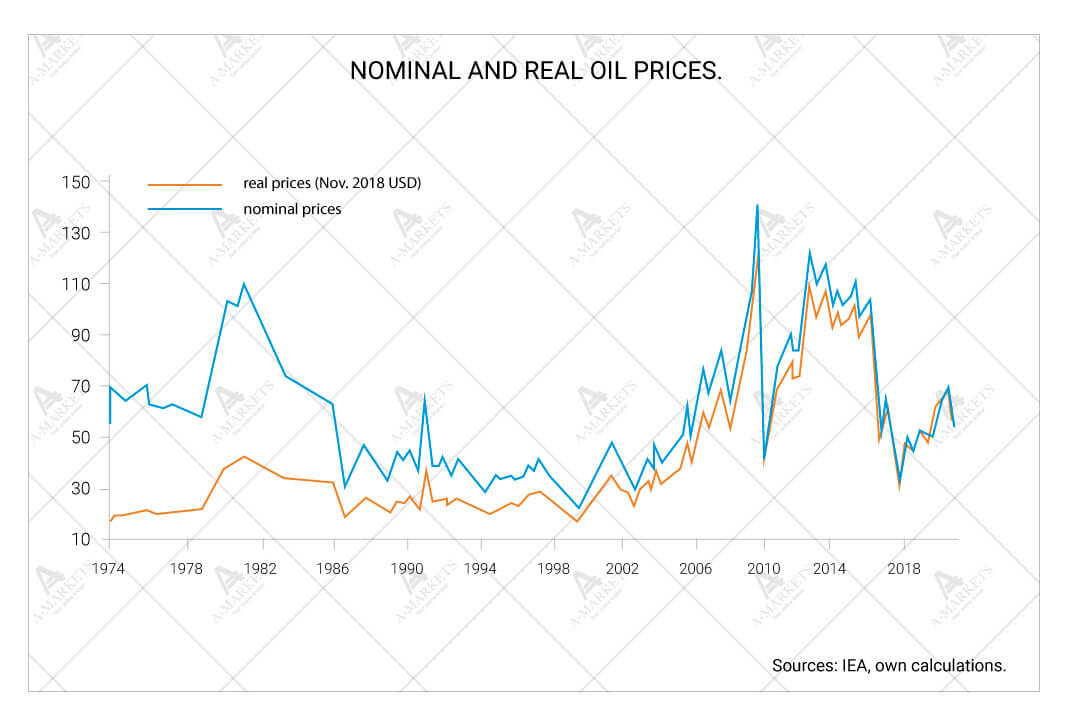 We interpret such patter as a clear sign of the move’s catch-up nature. Other assets that are sensitive to the economic cycle have long been signaling that growth is slowing down. Copper, for instance, took a dive back in mid-2018, declining by about 20%. Oil prices normally lag behind commodities. On top of that, there was some bullish speculation over the Iran sanctions and favorable supply/demand imbalance. Now that the entire commodity sector has sobered up, prices look in line with reality.

Market players have surely noticed that commodity FX posted little-to-none reaction to the crude’s disaster. The Canadian dollar, Norwegian krone, Mexican peso, and even the Russian rouble have all barely moved. As oil prices were plummeting by 30%, the currencies fell by 3% at most. In large part this is explained by the fact that those assets hadn’t appreciate as much as oil did. When markets realize that a rally in crude is triggered by temporary factors, it often doesn’t translate into exchange rates. And now the FX world is simply watching the oil prices come back down to the ground.

From now on, however, it may get a little more serious. The prices are now below their fundamentally fair levels, and should they dip lower, a more pronounced reaction will follow, specifically from the EM-assets. As already noted, we don’t expect crude oil to immediately continue its downtrend, but it is the main risk for MXN and RUB longs. Yet, one should understand that if crude prices decline due to speculative forces — which has been the case so far — the reaction will again be muted. 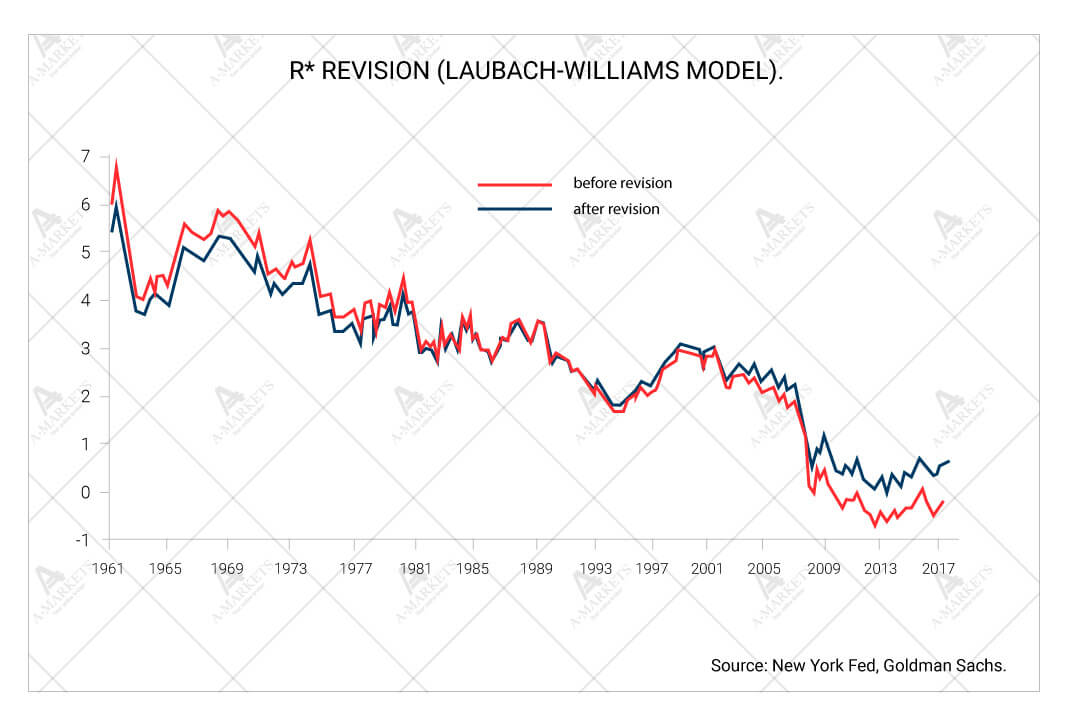 Another extremely important story is the change in the Fed’s rhetoric towards the end of November. FOMC chairman Jerome Powell stated that the benchmark interest rate is “just below” the neutral level now. This came in contrast to his comments just weeks earlier when he had said the rates were a “long way” from neutral. That’s a critical issue for the market. The head of the central bank acknowledging that the monetary policy is stimulative no longer gives a good reason to expect slower rate hikes.

Some are even speculating on a “Powell Put,” meaning the Fed chair would loosen policy if markets get too frantic. We, however, don’t believe that the shift in rhetoric has to do with the U.S. equities. The central bank is likely aiming to be consistent and making sure its policies are not contradictory. The matter is, another Fed official, New York Fed chief John Williams was also speaking that same week, and announced that the bank will conduct a year-long review of its monetary policy target. As a part of the review, the Fed will even sponsor a research conference in Chicago in June. 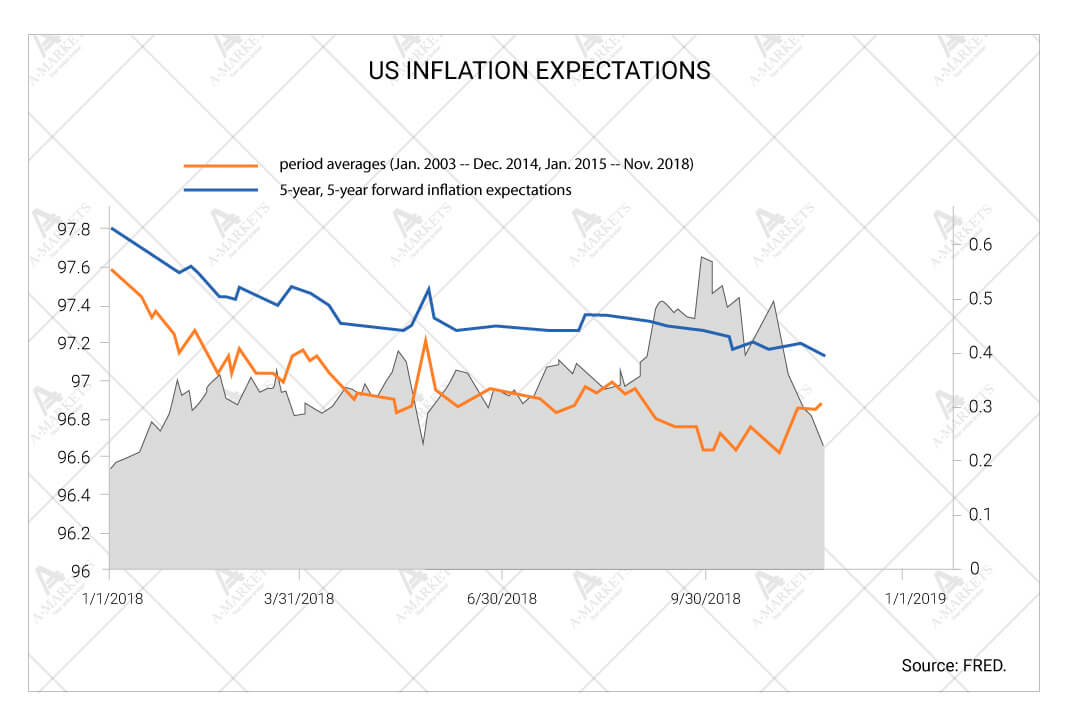 The academics are concerned with the consistently low inflation, as well as the too-low neutral rate (meaning that real rates would be too high if a recession hits). As of now, there are three options under review:

The initiative deserves a lot of attention, given that the Fed’s previous chairs Ben Bernanke and Janet Yellen have both backed some form of price-level targeting. This is extremely important. The above options imply that the central bank is willing to tolerate higher inflation, which isn’t favorable for investors, specifically in the fixed income market. These changes are surely to affect the dollar as well, especially on the back of the country’s loose fiscal policy. 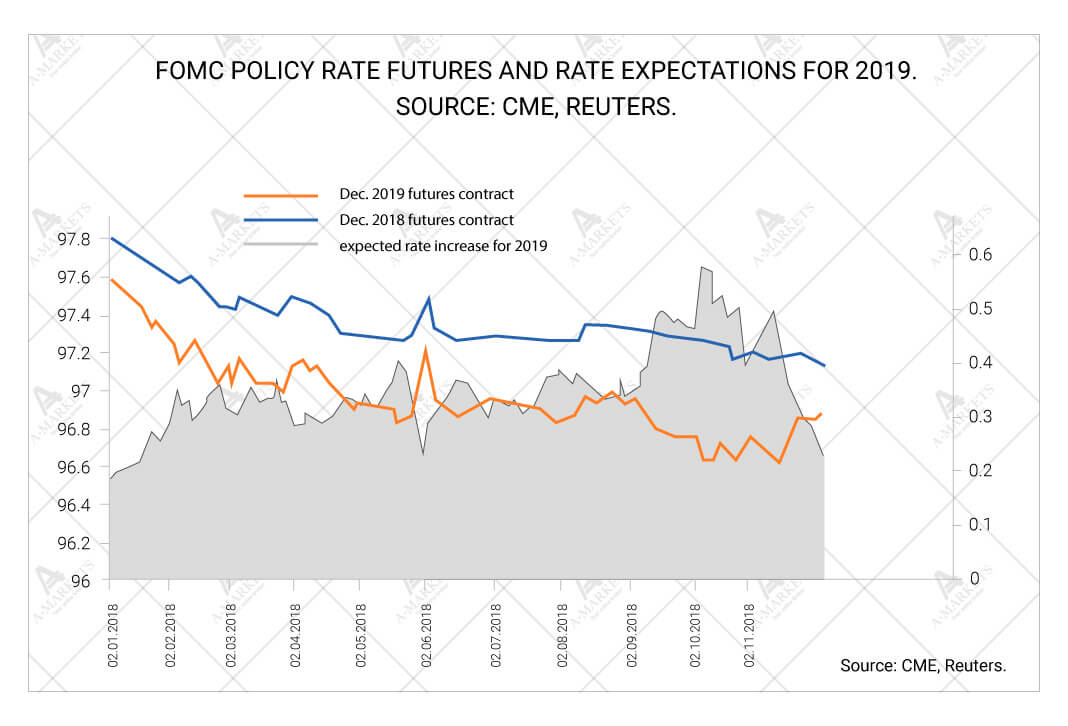 There are short-term implications of the Fed’s officials comments as well. As of the end of November, the market is expecting just one rate hike in 2019, although it was pricing in two hikes earlier. Yields on 2-year Treasury notes dipped to 2.8%, which also indicates softening expectations for rate increases. And, of course, the dollar has declined too. We believe that it will continue slow, but broad weakening for a few months. In fact, even commodity currencies that have been under continuous pressure (specifically, the Australian dollar) may get some relief.

We believe that the year will end with a fragile risk-on mood that will continue into early 2019. The only thing we’re concerned about is crude oil’s inability to stabilize. Once that happens, high-yielding currencies may rally by 2-3%. The euro and the pound have every chance to bounce back. 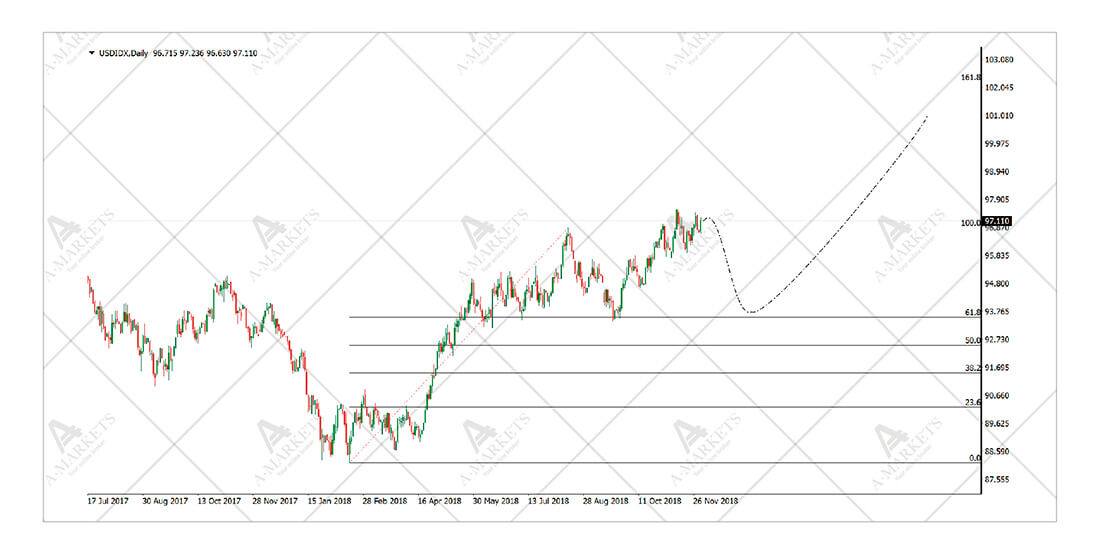 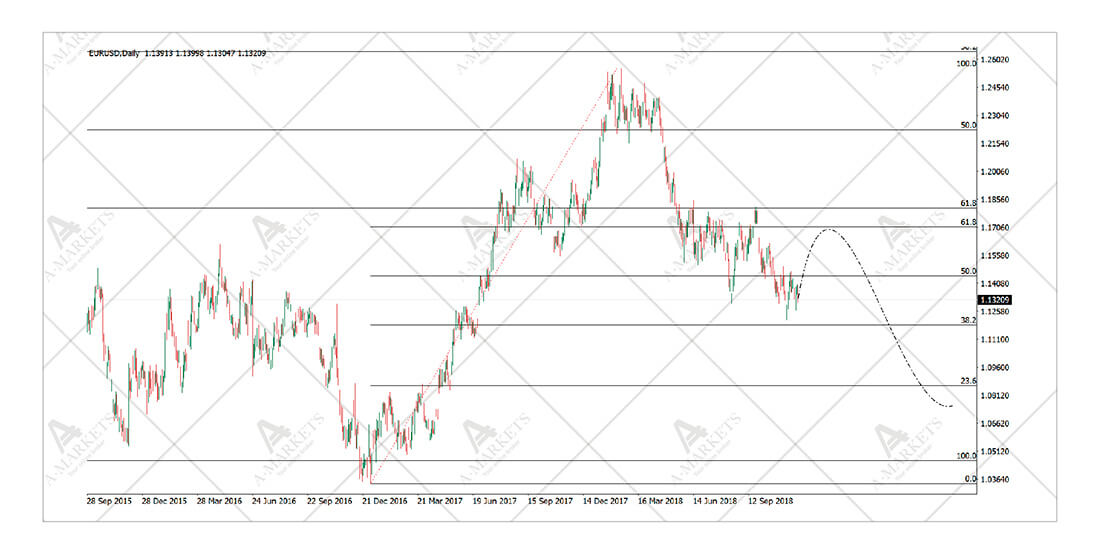 Interestingly enough, key currencies are directionless. Both the DXY and EURUSD keep sending mixed signals, which is natural for a market where there is no emerging trend, but rising volatility. But other USD pairs, namely USDCHF and AUDUSD, are hinting that some dollar weakening might be ahead. We also note general market reaction to the dovish comments made by Mr. Powell. Yields on 10-year Treasury notes, in particular, formed a top from the technical viewpoint.

Of course, the correlation between the dollar and interest rates over the past few months has dropped significantly, which makes cross-market analysis less efficient. It is, however, very likely that the EURUSD is passing through a pivot point as well. In general, the technical picture hasn’t changed much. There’s still a risk of the euro falling under pressure in case of a major negative event, which is looking less and less likely. The Italian budget plan is virtually a done deal. And the ECB has hinted that it is considering a fresh round of LTRO loans to banks as soon as the QE program ends. This would immediately solve Rome’s budget drama and could send the euro into the 1.17-1.18 area. 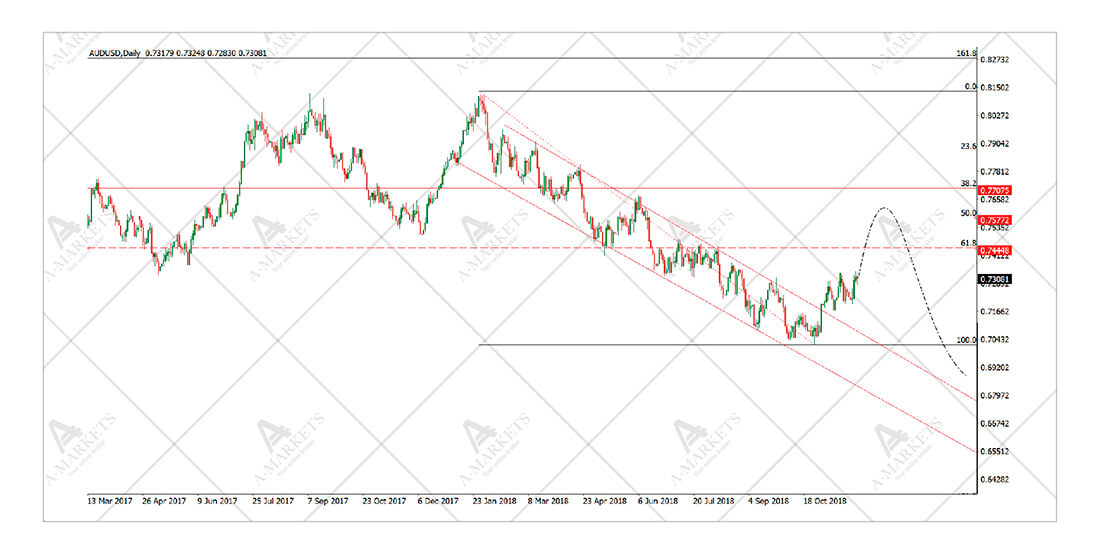 One of the main reasons to believe that the dollar rally has stalled is the AUD, CHF, and some EM-currencies breaking out of their multi-month trends. The AUDUSD has been going down throughout the year, exhibiting fundamental weakness. The Aussie was harmed by the slowdown in China, Canberra’s main trading partner. At this point, however, the market has discounted much of the risk, and any positive headline coming from China might have an immediate positive effect throughout the entire Pacific region.

From the technical point of view, November saw AUDUSD make a clean and sharp break through its 10-month downward trend. The pair is consolidating in the 0.715-0.73 range and is very likely to continue its corrective move up. The most conservative target lies at the 0.744 mark, but the 0.755-0.76 range is a likelier aim. It’s worth pointing out that the current levels look unfavorable for entry from the risk/profit point of view. Look for a retracement to 0.715 before entering longs. Alternatively, a short is also an option once the above targets are reached. The long-term trend is still directed towards 0.63. 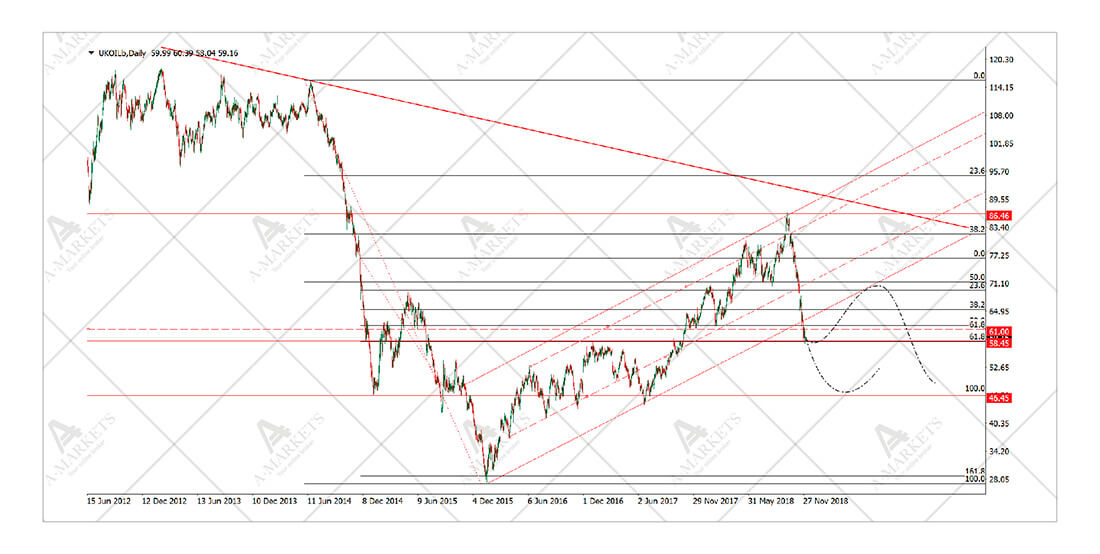 November was truly a month to forget for crude oil. The entire technical picture for this asset was unclear up until the very last trading day. We even delayed this very publication as we watched the month’s final close on Friday, November 30. Alas, it brought no good news. Brent is showing clear signs of weakness, and WTI looks outright horrible—wave analysis suggests that the American benchmark’s entire rally since 2016 now should be viewed as a correction to a major downward trend.

And Brent contacting with (and closing below) the $60.15 mark rules out interpreting the November collapse as a temporary drop. But the longer-term downtrend might develop under two scenarios. The first one implies a lengthy correction and a slow grind to $65-70 a barrel. The prices will then gravitate towards $47, where oil becomes undervalued. The second scenario is an immediate movement to $47, then a correction, and finally a drop to $27, where the market is fundamentally oversold. We note that levels below $30 serve as the final target in either case. The technical pictures for Brent and WTI are never too different, and the American benchmark has surely lost its drive. The $86 price tag for Brent and $77 for WTI are therefore likely to prove local highs for several years to come.